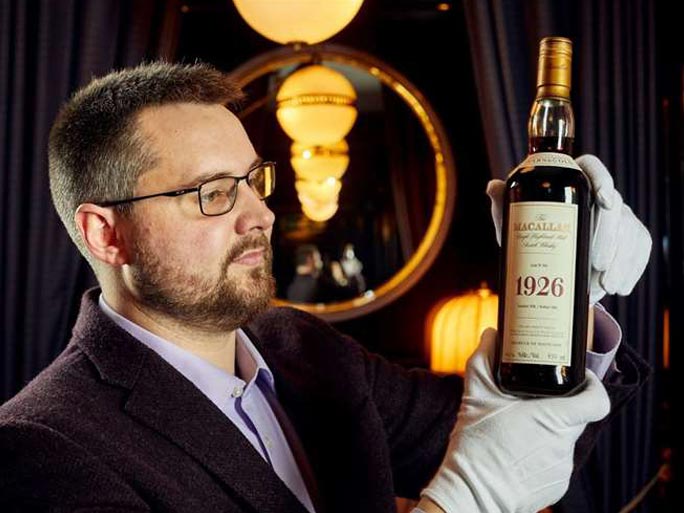 The second half of one devoted whisky lover’s ‘perfect collection’ will go under the hammer next month in a sale that is set to go down in whisky history.

From February 12-222021, over 1,900 bottles of the rarest, most coveted and expensive single malts in existence, including many from Scotland’s long lost distilleries, will feature in the sale hosted by online whisky auction specialists, Whisky Auctioneer.

Leading the auction is the world’s most expensive bottle of whisky – The Macallan 1926 Fine and Rare 60 Year Old. Drawn from hallowed Cask #263, containing liquid distilled nearly a century ago in the height of America’s Prohibition, this is one of no more than 14 in the world adorned with the iconic Fine and Rare label.

Considered the most coveted bottle of whisky in existence and the pinnacle in rare whisky collecting, the headline bottling is expected to fetch a hammer price of over £1m.

This is not the only collector’s item available in the auction, with whiskies such as The Balvenie 1937 50 Year Old also featured and icons of the whisky world hailing from Bowmore’s legendary 1964 vintage. Elusive whiskies from a bygone era in Scotland’s distilling landscape also appear, including a 1921 private cask bottling of Dallas Dhu which has not been seen on the secondary market for over 25 years.

Iain McClune, Founder of Whisky Auctioneer said: “Mr Gooding’s Collection is nothing short of extraordinary and we are honoured and delighted to bring it to auction. Collectors, investors and whisky lovers alike will have their interest sparked by the truly astonishing array of whiskies on offer.

“Undoubtedly the entire collection is crowned by the incomparable The Macallan 1926 Fine and Rare, a whisky that has in recent years become the pinnacle of whisky collecting and for good reason. With no more than 14 bottles in existence the rarity of this opportunity cannot be overstated and we anticipate that the battle for this icon of whisky will be a mighty one.”

Old and rare whisky expert, Angus MacRaild, commented: “The Macallan 1926 Fine and Rare is one of those handful of iconic whisky releases which has accrued such a lofty status that it exists more in relation to fine art these days than other whisky bottlings. Its performance at auction will no doubt be a powerful, bellwether statement about just how iconic and culturally relevant Scotch Whisky remains in the 21st century. Irrespective of where you sit in the whisky world, the chance to see such a bottling come to auction and potentially break price records is undeniably fascinating and exciting.

“The most notable aspects about The Perfect Collection, for me, are that it offers enthusiasts and drinkers of old style whiskies a treasure trove of opportunities to obtain obscure and very rarely seen independently bottled single malts done solely for the USA market – bottlings which are now all but impossible to otherwise obtain.

“But overall, the collection represents who Mr. Gooding was as a person, his preferences as a drinker, his quirks and historical fascinations. It’s clearly a collection put together by someone who genuinely loved whisky and who loved to open, enjoy and share it with friends, as all great collections should be.”

Those who used to look to the markets for investment may, at this time, be looking for alternative investments in assets. Not only is whisky seeing a rise in demand with value tied to liquid rarity, recent reports have shown that over the last decade rare whisky has seen a huge increase in value, overtaking more traditional alternative investment assets such as cars and fine art.

The collection was amassed by late American businessman and philanthropist, Mr. Richard Gooding, who dedicated over two decades to collecting whiskies from almost every Scottish distillery. Guided by his passion for Scotch, its provenance, and the iconic distilleries that craft it, Mr. Gooding travelled regularly to Scotland to search for special bottles in pursuit of creating the ‘perfect collection’ – a representation of every Scottish distillery, open or closed.

His collection would grow to become an eclectic library of 3,900 bottles of primarily single malt whisky – one of the largest and most significant whisky collections ever to go to public auction.

• A host of highly sought-after bottles from some of Scotland’s lost distilleries including Dallas Dhu, Port Ellen, Glenugie and Killyloch with some bottles dating back as far as 1921.

• Other historic artefacts in the sale include a 1924 Royal Brackla 60 Year Old, of which only 62 were ever bottled, 1922 vintage Highland Malt from Berry Brothers and Rudd and a 1930s example of Old Vatted Glenlivet from Andrew Usher & Co. the industry fathers of whisky blending.

• Incredibly special and rare Bowmore finds such as the 1967 Largiemeanoch, the heralded 1964 vintage Oddbins exclusive and a 25 Year Old expression limited to just 75 bottles which were gifted exclusively to guests at the Auld Alliance reception at Chateau Lagrange in 1995.

• Near impossible to acquire, The Perfect Collection features some of America’s most enigmatic and sought-after Black Maple Hill whiskeys.

• A singular, one of one bottling of The Balvenie Vintage Cask 1961. A truly unique bottling, hand-filled and labelled at the distillery two years prior to the official 1961 Vintage Cask release in 1999.