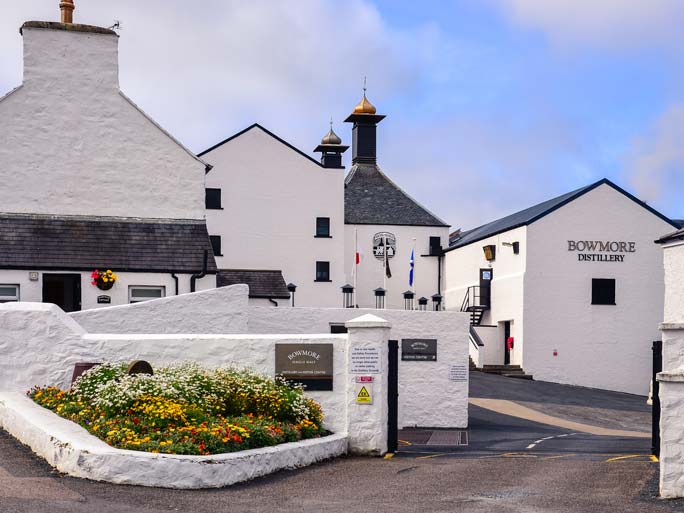 As the oldest distillers on the Isle of Islay – founded in 1779 – Bowmore is surely entitled to speak with some authority. It was in the early 1980s that this writer made the long trek to the small town of the same name on the south-east shore of Loch Indaal. At the end of the tour, just before we retired for a glass of the rich, colourful spirit, our guide held up a pie chart telling us exactly where our money went when we bought a bottle.  Manufacturing costs came to £1.69. There was distribution and retailers’ mark-up of course, but by far the biggest slices of the pie went to various taxes and duties. Little changes when it comes to whisky.

Bowmore still hand-turns its barley on its own floor, much of it grown on the island. It is that commitment to tradition and detail that gives the malt its complex balance of smoke, fruit and sea-salt.

The distillery’s history is almost as colourful as the whisky it produces. One former owner, of German descent, was a vice-consul representing the interests of Portugal, Brazil and the Ottoman Empire! In 1980, the company displayed its public spirit when it handed over a warehouse to the community to be used as a swimming pool and leisure centre. Waste heat from the distilling process is piped underground to heat the pool. During World War 1, production ceased and the distillery and the loch became home to RAF Coastal Command, affording the town’s youngsters the unusual sight of flying boats taking off and landing.

Now owned by the American-Japanese conglomerate Beam Suntory, the core Bowmore range features 12, 15, 18 and 25-year-old offerings. In addition there are a number of limited and speciality editions, but the 2020 issue of just 25 bottles of Black Bowmore DB5 1964 will take some beating, with Aston Martin as a partner in the enterprise. The edition marks the year that coal fire gave way to steam for heating the stills and the first Black Bowmore flowed.