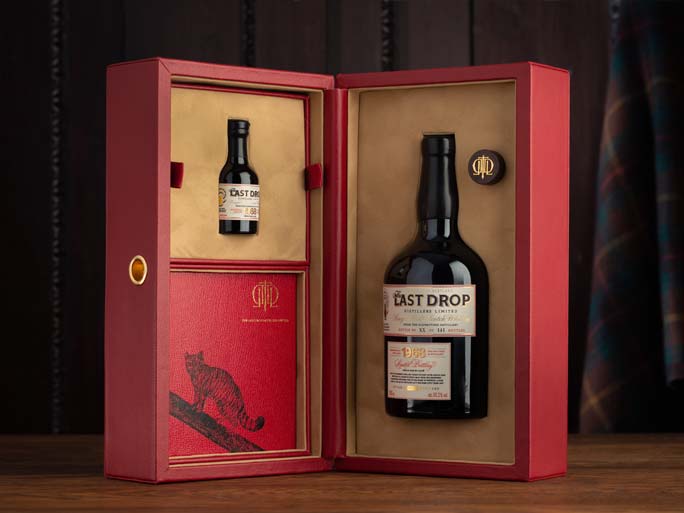 Originally Posted By This Is Money

Investors could warm up their portfolios with a wee dram – as rare Scotch prices soar on the back of the Brexit deal.

The United States imposed a 25 per cent tax on single malt Scotch imports a couple of years ago – punishment for the EU subsidising aircraft maker Airbus.

It led to the price of some of the most collectable bottles of whisky falling by about ten per cent. Yet prices have started to rise again.

Whisky broker Rare Whisky 101 has put together an RW Apex 1000 index that tracks the collective price performance of the 1,000 most sought-after whiskies.

Raising a glass: Whisky broker Rare Whisky 101 has put together an RW Apex 1000 index that tracks the collective price performance of the 1,000 most sought-after whiskies

It rose by almost 7 per cent last year and over the past decade has increased in value by 595 per cent – in large part due to an explosion in demand for whisky from abroad.

Over the same ten-year period, the FTSE All-Share Index has rise by just over 25 per cent.

Now, as the Brexit deal settles in, experts predict America will cut this hefty tariff as part of new trade negotiations.

This could help create a rise in global demand for the most sought-after tipples – leading to a surge in prices as the market expands and rare whisky supplies dry up.

You will not find investment quality whisky on your local supermarket shelf.

The smart investment money goes on whisky costing at least £100 for a standard 700 or 750-millilitre bottle – and it should be a single malt from a distinguished distillery where typically it has been aged in a barrel for at least 20 years.

This is different from the blended mixes that make up about 90 per cent of whisky consumed.

The most sought-after product usually comes from a Scottish distillery – which is where it earns the nickname Scotch.

It must be kept in a barrel for at least three years before it can officially be called whisky.

When it comes to picking bottles that will increase in value, Rare Whisky 101 lists top distilleries including Ardbeg, Balblair, Balvenie, Bowmore, Dalmore, Glenfiddich, Glenlivet, Glenugie, Highland Park, Killyloch, Lochside, Macallan and Springbank. But whiskies from distilleries that have closed – including Brora, Dallas Dhu, Glen Flagler, Rosebank and Port Ellen – also command some of the highest prices.

A spokesman for Rare Whisky 101 says: ‘Older aged Scotch is becoming increasingly prized from an investment perspective. And we are also seeing increased interest in previously overlooked gems – such as Clynelish, Mortlach, Glendronach and Talisker.

‘The distillery Macallan accounts for the largest market share for trading but you should also consider other whisky distilleries.’ 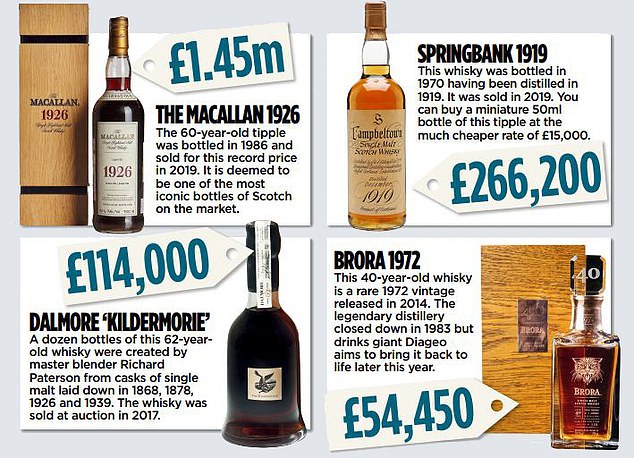 Buying from a specialist auctioneer, such as McTear’s Auctioneers, is the most popular way to get investment quality whisky. This comes with a guarantee of authenticity – and you will be refunded if the bottle is found to be a fake.

McTear’s typically demands a 24 per cent buyer’s premium on top of the hammer price. And when it is time to sell, the auctioneer can also demand a 15 per cent cut of the sales price.

Fakes are rife. Three years ago, a study conducted by the Scottish Universities Environmental Research Centre in East Kilbride discovered that almost a third of whiskies it tested were fakes.

Whisky is traded in an unregulated market, so it is not possible to seek redress from the Financial Services Compensation Scheme if you are a victim of a fake.

Next month, a bottle of the world’s most expensive whisky – The Macallan 1926 Fine and Rare 60 Year Old – is expected to sell for a record-breaking price.

It is one of only 14 bottles of this ‘pinnacle’ Scotch known to exist. It is being auctioned by Whisky Auctioneer as part of a collection once owned by former PepsiCo bottling magnate Richard Gooding.

Other auction houses to consider include Scotch Whisky Auctions and Whisky. Auction which, amid the pandemic, are still conducting online auctions.

Bottles of whisky can be stored indefinitely without going off – provided they are placed upright and out of direct sunlight. The age of a whisky is the amount of time it has been kept in a cask – and this is what provides its colour and flavour.

Although the vast majority of investors buy whisky bottled, it is also possible to purchase when still in the barrel.

Trading while still in the cask enables investors to avoid paying tax duties or VAT – just as long as it remains in a bonded warehouse. Barrels vary widely in size but a typical 225-litre cask can produce more than 200 bottles of whisky.

Simon Aron, managing director of whisky stockist Cask Trade, says: ‘You may typically invest anything from £1,000 to £30,000 in a cask of whisky.

‘Investors should be aware there is something known as the angel’s share – where up to 3 per cent of the whisky evaporates. Outfits such as ours enable you to trade whisky while in the cask with others wanting to buy before it ever gets into a bottle.’

Aron believes a conservative estimate of investment returns from casked whisky could be about 8 per cent a year. But you must factor in annual costs of perhaps £50 for insurance and £20 for storage.