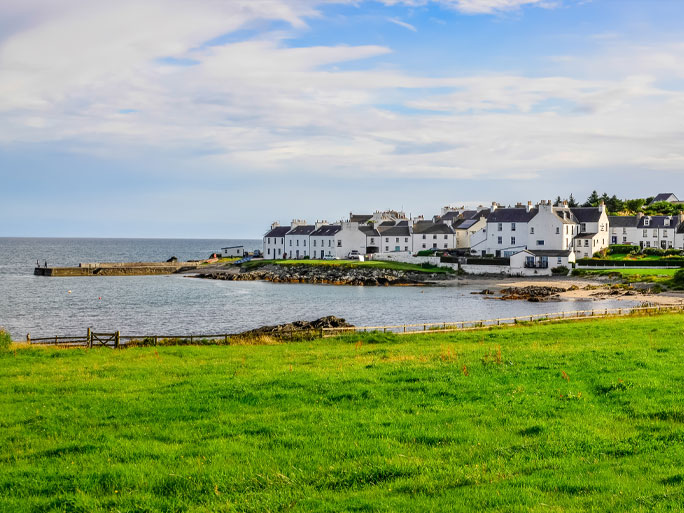 Port Charlotte may have been ‘squatting’ at the Bruichladdich distillery two miles up the road, whilst its own premises were being rebuilt, but the two whiskies could not be more different. The former belongs to that easily identifiable Islay tradition of heavily peated, rich and smoky, attaining a ppm (phenol parts per million) of a very respectable 40. With the familiar iodine and seaweed notes to the fore and just a touch a carbolic on the nose, you know the wind-tossed sea was not far away during the long years of maturation.

The original distillery was founded in the eponymous village in 1829, and was originally known as Lochindaal. In 1885 when the professional distillery visitor and whisky writer Alfred Barnard called in, it was producing 128,000 gallons of spirit a year, considerably  more than others on the island. It was still in operation a century later when it, like many others, was forced to close due to Prohibition in America which meant a huge falling off in demand.

The buildings were maintained for a while and largely survived, one later being used as a garage, another housing the Islay Youth Hostel.  This meant that when the time for modernisation and expansion, there was somewhere to house the new distillery, which was in fact the former Inverleven Distillery at Dumbarton on the River Clyde! It was bought down river on barges and resurrected in the first Port Charlotte home. The capacity is now 1.2 million litres a year, with constant best sellers being the Scottish Barley version at 50% ABV, and the Port Charlote 11 at 59%.

The Port Charlotte people take immense pride in their artisan approach to whisky-making, placing emphasis on provenance and traceability as well as the layered-flavour and modernity of the finished product, which is of course bottled locally using further supplies of spring water.