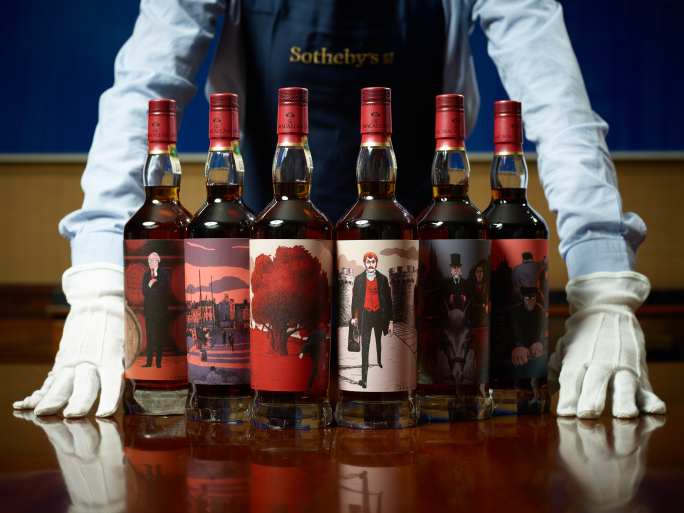 *Featuring The Macallan 78 Years Old, the Oldest Aged Whisky Ever to be Sold at Auction*
*Proceeds to be Donated to Food Charity, City Harvest London*
The Second Part of the Ultimate Whisky Collection Realises £1,057,364 / $1,366,431

*The Most Valuable Whisky Collection Ever to be Sold at Auction*

This morning in London, a complete set of The Red Collection, a new classic aged collection of single malt from The Macallan, achieved £756,400 / $975,756 in Sotheby’s first annual sale of Spirits to fall on the day that Halloween is celebrated around the world, The Ultimate Whisky Collection Part II + More. Against a low estimate of £200,000, the hammer came down as determined collectors online and in the room competed to own the only set of its kind to be made available for sale. Acquired by an Asian private collector, the set was gifted by The Macallan to City Harvest London to raise funds for the food charity which redistributes surplus from the food industry to vulnerable people across the capital. Proceeds from the sale will provide almost two and a half million meals for those in need.

The complete set of six whiskies in The Red Collection is anchored by The Macallan 40 Years Old, The Macallan 50 Years Old and The Macallan 60 Years Old, which are joined by two further highly aged bottles at 71 Years Old and 74 Years Old. The sixth and final bottle in this collection has been matured for 78 Years, making it not only the oldest bottle released from The Macallan Distillery, but the oldest age statement whisky ever offered at auction. The extremely rare set offered today differs from the standard release and is distinguished by its exclusive labels, which are illustrated and signed by Spanish artist Javi Aznarez. Only two sets feature these labels: Set #1 will remain in The Macallan’s archives and Set #2 was presented in the Sotheby’s auction.

The auction continued with the second part of the Ultimate Whisky Collection which realised £1,057,364 / $1,366,431, bringing the combined total for parts I and II to £8.7 million / $11.2 million. Sotheby’s sale of Part I in October 2019 set the record for the most valuable whisky collection ever sold at auction at £7.6 million / $10 million, an auction record any bottle of wine or spirit with The Macallan Fine & Rare 60-Year-Old 1926, sold for £1.5 million / $1.9 million, and distillery records for Bowmore, Brora and Glenfiddich and Springbank. The second part of this superlative collection included whiskies aged in excess of 50 years from The Macallan, Bowmore, Glenfiddich and The Dalmore, and exquisite independent bottles from Silvano Samaroli.

“This exceptional result for The Red Collection is testament not only to the strength of the whisky market but also to the esteem with which The Macallan is held. Equally, the result of The Ultimate Whisky Collection Part II cements its position as the most valuable whisky collection ever sold at auction. The overall total for The Ultimate Whisky Collection speaks volumes of the diversity in today’s premium whisky market and the importance of provenance to collectors. A fantastic result for Sotheby’s inaugural Halloween spirits sale and City Harvest London.”

“Global communities are key to The Macallan and as part of our commitment to giving back, we are pleased to have collaborated with Sotheby’s to auction this extremely rare, complete set of The Red Collection, which features our oldest ongoing aged expressions and a selection of high aged guest releases, including the oldest bottlings our brand has ever released. This bespoke auction lot has raised an incredible amount of funds for food charity, City Harvest London, with a final sale price of £756,400, which crucially equates to almost 2.5m meals delivered to people in need. This will allow the charity to continue to make a real difference to people’s lives, and we are very supportive of their sustainable vision and efforts to support those most in need.”

“We are overwhelmed with the incredible support The Macallan has given us, and the fantastic figure reached. Huge congratulations to everyone who has been involved, what terrific news! The proceeds from this auction will be critical in nourishing and improving the lives of tens of thousands of people in the very challenging months ahead, as we are able to expand our operations to include more charities and groups feeding people in London. We are so appreciative of the continued support of The Macallan, their interest in our mission, and commitment to people and the planet.”

ABOUT THE RED COLLECTION

Inspired by the significance of the colour red throughout the history of the brand, The Red Collection captures The Macallan’s deep respect for tradition and craftsmanship. Distilled decades ago, in The Macallan’s signature copper stills, each expression in the collection has been matured in the distillery’s oak casks under the watchful eye of several generations of whisky makers. Over time, they developed into extraordinarily elegant aged whiskies.

The colour red has deep and long-standing significance for The Macallan, beginning with Alexander Reid, the farmer and teacher who founded The Macallan in 1824, whose surname means ‘the red one’ in Scots and was originally associated with red hair. In 1903, owner Roderick Kemp launched The Macallan Choice Old range, which was reportedly shipped in cases labelled with distinctive red print to distinguish it from The Macallan’s existing whiskies, which featured black labelling. Almost eight decades later, in 1980, red was to feature strongly in the release of The Macallan’s then oldest vintages, dated 1938, 1940 and 1950. Allan Shiach, chairman of The Macallan at that time, tied a red ribbon around the sought-after bottlings to denote their age and value.

These three characters are featured in an animated film created to introduce The Red Collection in collaboration with Javi Aznarez, acclaimed for his striking graphic art which has featured in several films, including director Wes Anderson’s forthcoming feature, The French Dispatch. The animation is set to music recorded by Scottish violinist Nicola Benedetti, one of the most sought-after classical musicians of her generation.

Each bottle in The Red Collection is encased in a hand-crafted oak presentation box created from the same sustainable European oak used to craft The Macallan’s oak casks. These boxes are beautifully upholstered with sustainably sourced soft red leather from Scottish supplier Bridge of Weir Leather, which creates upholstery for leading luxury car brands across the globe. The Sotheby’s set uniquely included two exclusive display cases and two bespoke tables.

About The Macallan
Founded in 1824, The Macallan is renowned worldwide for its extraordinary single malt whiskies. Their outstanding quality and distinctive character reveal the uncompromised excellence pursued by The Macallan since it was established by Alexander Reid, on a plateau above the River Spey in north-east Scotland.

In 2018, The Macallan opened a new chapter in its history with the launch of its award-winning Speyside distillery. Designed by internationally acclaimed architects to promote sustainability, the building takes inspiration from the surrounding ancient Scottish hills. It stands nearby Easter Elchies House, the Highland Manor built in 1700 which is The Macallan’s spiritual home and remains the heartbeat of The Macallan’s beautiful 485-acre Estate.

About City Harvest
City Harvest is part of London’s support network, enabling quality surplus food to be redistributed for free to those unable to access food. A sustainable vision for London feeding Londoners, underpinned by the belief that everyone has the absolute right to food. Working with manufacturers, farms, retailers, studios, and markets, City Harvest vans collect healthy surplus food and deliver to over 300 charities and organisations that feed those facing food poverty.

About Sotheby’s Wine
Sotheby’s Wine’s annual worldwide sales in 2019 significantly exceeded $100 million for the second consecutive year, led by a 20% increase in auction sales to a total of $118 million – the highest-ever annual total in Sotheby’s history.

Sotheby’s Wine, with a store located within the auction house’s worldwide headquarters on New York’s Upper East Side, offers a carefully curated selection of wines from the world’s most prestigious producers and important regions. Expertly assembled by Sotheby’s’ experienced specialists, the ever-evolving selection is built upon lasting relationships with winemakers from across the globe, with prices beginning at just $13.95. With bottles that are ready for immediate consumption, in addition to investment-worthy wines from highly sought-after vintages, each wine is chosen for its expression of its region and value for money. Each bottle selected by Sotheby’s specialist team must pass the brand’s signature “three-glass” tasting guideline, meaning that the tasters must like it enough to want to drink three glasses, or the standard amount enjoyed when sharing a bottle.