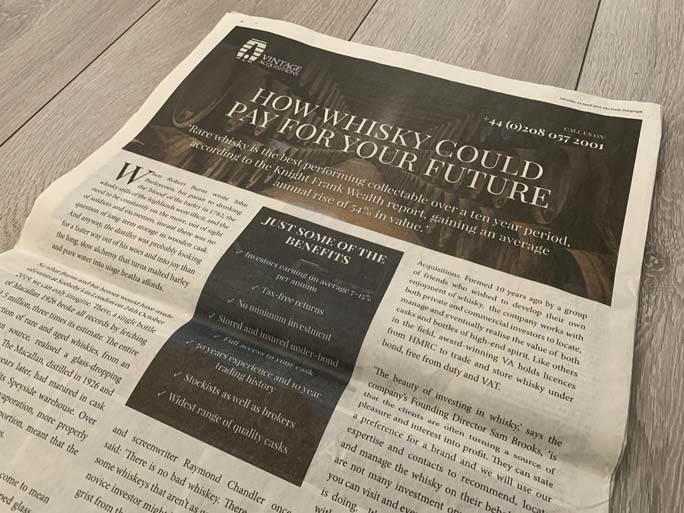 Our advert in The Telegraph on Saturday 24th April

When Robert Burns wrote John Barleycorn, his paean to drinking the ‘blood’ of the barley in 1782, the whisky stills of the highlands were illicit, and the need to be constantly on the move, out of sight of soldiers and excisemen, meant there was no question of long-term storage in wooden cask. And anyway, the distiller was probably looking for a faster way out of his woes and into joy than the long, slow alchemy that turns malted barley and pure water into uisge beatha affords.

So what Burns and his heroes would have made of events at Sotheby’s in London on 24th October 2019, we can only imagine. There, a single bottle of Macallan 1926 broke all records by fetching £1.5 million, three times its estimate. The entire collection of rare and aged whiskies, from an American source, realised a glass-dropping £7,635,619. The Macallan, distilled in 1926 and bottled sixty years later, had matured in cask number 263 in its Speyside warehouse. Over those long years, evaporation, more properly known as the angels’ portion, meant that the cask yielded only 40 bottles.

Clearly, single malt whisky has come to mean considerably more than a tulip-shaped glass, a dash of water to set the oily esters dancing, a favourite armchair by a roaring fire and a highly contented smile. Indeed, in recent times much of the older product of Scottish glens, highlands and islands has proved as safe and profitable an investment as gold, diamonds, property, stocks and bonds. The respected Knight Frank Wealth report for 2020 stated that ‘rare whisky is the best performing collectable over a ten-year period, gaining an average annual rise of 54% in value.’

So, what is the secret of turning single malt whisky, in all its myriad varieties, into an investment as heartening as a large Laphroaig? Age, rarity and quality are the key factors. But given that no less an authority than novelist and screenwriter Raymond Chandler once said: ‘There is no bad whiskey. There are only some whiskeys that aren’t as good as others,’ the novice investor might have a job separating the grist from the grain.

Help is at hand. The boom in collectable barrels of maturing whisky has created a new kind of investment specialist – the cask master. Among leaders in the field is London-based Vintage Acquisitions. Formed 10 years ago by a group of friends who wished to develop their own enjoyment of whisky, the company works with both private and commercial investors to locate, manage and eventually realise the value of both casks and bottles of high-end spirit. Like others in the field, award-winning VA holds licences from HMRC to trade and store whisky under bond, free from duty and VAT.

‘The beauty of investing in whisky,’ says the company’s Founding Director Sam Brooks, ‘is that the clients are often turning a source of pleasure and interest into profit. They can state a preference for a brand and we will use our expertise and contacts to recommend, locate and manage the whisky on their behalf. There are not many investment opportunities where you can visit and even sample what your money is doing. It’s an exciting time to be involved with rare whiskies and it’s a tax-free investment.’

If George Bernard Shaw were writing the same sentence today, he would doubtless proclaim: ‘Whisky is liquidity sunshine’.