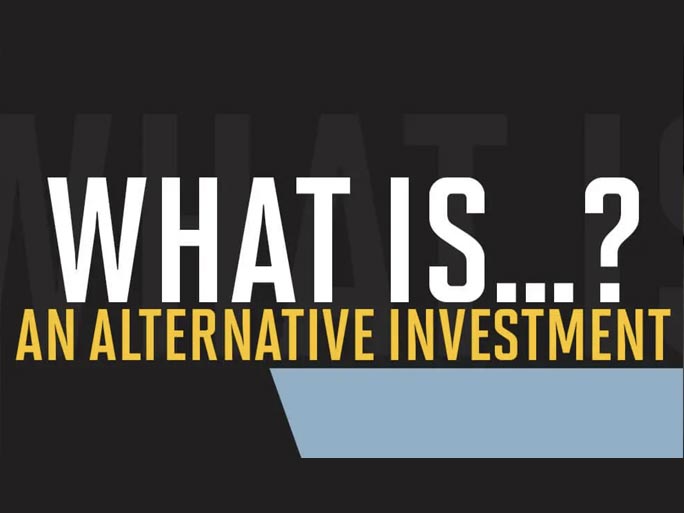 Originally Posted By Value The Markets

If you’ve ever asked yourself what an alternative investment is and why it’s different from other investments, then we’ve got all the information you need.

What you need to know

In their simplest terms, alternative investments are ones that fall outside the conventional categories—cash, stocks, and bonds. For this reason, they are not typically as well-regulated as conventional investments, often laying beyond the scope of regulators like the SEC and the FCA.

According to Icon Alternatives, the history of this kind of investing dates back to the Dutch ‘tulipmania’ of the 1600s. In short, tulip bulbs became more and more valuable in Holland in the early to mid-1600s as speculation pushed their value higher and higher. At the height of a bubble that burst spectacularly in 1637, the flowers reached over six times the average salary of the time.

Here, we look at the pros and cons of the alternative way of investing, before highlighting some examples for those investors who fancy adding some truly unique diversification to their portfolio…

Independence from the stock market is a definite plus, with alternative investments gaining popularity in troubled times conventional markets get too risky. This is because such assets are not so beholden to world events as conventional investments. For example, the desire to own a Rembrandt, or a bottle of Macallan 1926, does not necessarily diminish just because there’s a new US president or a deadly virus outbreak.

This means that alternative assets often move counter to your garden variety equities and bonds. It also means that they can act as an investment hedge at the same as diversifying a portfolio.

Alternative investments also tend to have a fixed, underlying value, unlike actively traded stocks that can dive to zero in a matter of hours.

Take that Macallan 1926, for example, which sold for £1 million in February. It’s thought that there are no more than fourteen such bottles left on earth, and the distillery is of incredibly high renown. This means that, even if Macallan was forced to close its doors, the whisky would lose none of its value. In fact, the increasing rarity would likely enhance its appeal.

There is also the potential to achieve a higher rate of return on alternative investments than for more traditional investments. Bottles of Bowmore Black 1964, for example, which initially sold at just £80 have since sold for £15,000 – nearly 200 times their original price tag.

As with any kind of investing, there are risks to consider too – so let’s take a look at some of them.

While many alternative asset classes have some type of regulation, this is far from universal. And it is this lack of policing that has to be the biggest drawback when it comes to the investing style.

Bottom line is, when going it alone – perhaps by building your own art or stamp collection– it can be hard to avoid pitfalls and scams. For example, a painting might be fake or an artist far less renowned than claimed.

Chinese writer Zhang Wei famously paid close to 10,000 Swiss francs for just one glass of a fake 1878 Macallan whisky. Thankfully he got a refund, but the story illustrates how real these risks can be.

Another downside of alternative investments is that they can be highly illiquid, ‘locking-in’ investors for a minimum amount of time. So, where investors can buy and sell Amazon.com (NASDAQ: AMZN) stock in the same day, it would be next to impossible to do the same thing with a Banksy painting.

Not only that, but alternative investments are often all in the same asset class. For example, a collector may own a large art collection or several rare stamps, which introduces concentration risk.

Finally, tax changes are also a worry. Changes in tax legislation might bring trouble, but it’s not always straightforward to sell.

Now we’ve established the pros and cons of alternative investing, let’s take a look at some of today’s best-known examples…

The collectible spirits market is thriving right now, pairing critical safe haven asset qualities with astonishing growth rates over the last decade. To give a sense of scale, the 2020 Knight Frank’s Wealth Report showed an astronomical 564% growth in the value of rare whisky over the last ten years.

Famous distilleries to look out for include Dalmore, Lagavulin, Springbank, Ardbeg, Brora, Bowmore, and Macallan. There are also independent bottlers to consider, who may bottle just one barrel, increasing the rarity of their product.

The other arm of the whisky investment industry lies in investing in casks themselves – and this can be equally attractive.

A number of businesses have emerged to help with this kind of investing. This includes companies like The Whiskey & Wealth Club, Cask Trade, and Whisky Investment Partners.

Unopened and well-stored whisky maintains its quality, so investors can keep hold of their bottles as long as they like. Similarly, a cask grows more valuable the longer it matures.

In either case, this makes for a highly flexible investment that won’t lose value. Some export experts even suggest whisky could be a better long-term bet than gold.

Speaking of gold, precious metals have been in high demand of late. Gold is the most well-known ‘safe haven’ asset, with prices rising in times of recession.

Many turned to the gold in 2020 as the Covid-19 pandemic wreaked havoc on stock markets. This even led gold to pass the $2,000 an ounce mark for the first time in history.

Other highly regarded precious metals include silver and platinum. Like its more valuable cousin gold, the price of silver saw a huge spike in 2020 to more than $20 an ounce in August from less than $14 at the end of 2019.

There are various ways to add precious metals to a portfolio. For example, investors might buy physical bullion in the form or minted bars or coins. Or, alternatively, they can buy futures contracts for the metal in question.

Precious metals, especially gold, have benefitted in particular from quantitative easing (“QE”) measures in the modern era. Since such action was introduced in the wake of the 2008 financial crash, the US Federal Reserve has struggled on more than one occasion to stop issuing new credit through QE and reduce its balance sheet. But, each time, markets took fright and the policy was reversed.

If the US can’t manage to undo the policy, other major economies are just as unlikely to have any luck.

Not only that, but the pandemic has only added to borrowing, making inflation almost a guarantee and improving the prospects for gold as a well-known hedge against inflation.

Elsewhere, modern gold mining has yet to match the historic scale of South Africa, which hit peak production of 1,000 metric tons of the precious metal in 1970. Even though China has increased production, its figure of 380 tons in 2020 was well under half that amount.

The more well-known cryptocurrencies, like Bitcoin, are based on blockchain technology. This is a ledger, distributed across different computer networks, that keeps track of transactions.

Miners can earn cryptocurrency by helping to maintain a ledger. For each cryptocurrency transaction to take place, it must be verified by other users. Miners then group these transactions into a block and add them to the blockchain.

The price of Bitcoin has taken incredible leaps in the past ten years. This started in 2011, when the price of a single Bitcoin jumped more than 3,000% to $32 in June from $1 in April. The price has continued to climb to dizzying heights, though often with sharp dips, with the Bitcoin price at time of writing standing at more than $55,000.

But there are a host of other cryptocurrencies as well. High profile examples include Ethereum, which recently crossed the $4,000 mark with many traders hoping it will beat $5,000 by end-June 2021.

Then, of course, there is the unexpected success story of Dogecoin. The coin was created in 2013 as a tongue-in-cheek response to the cryptocurrency boom and gets its name from a popular meme at the time featuring a Shiba Inu dog. The price of Dogecoin got a sudden boost when Elon Musk hinted that Tesla may start accepting the cryptocurrency.

Volatility in the crypto space makes investment particularly risky. Even the most established of these currencies, Bitcoin, was created just twelve years ago. As a result, the unknowns in this new and emerging space vastly outnumber the knowns, both good and bad.

Another new and popular alternative is crowdfunding. This involves sourcing money from the population at large rather than a bank or investor group.

Crowdfunding comes in a few different flavours, but most relevant to investors are equity crowdfunding and debt-based crowdfunding.

Equity crowdfunding allows investors to provide start-up funds to businesses in exchange for equity. Should a crowdfunded business perform well, then investors would expect to see the value of their stake increase. And, in the event of a sale or IPO, shareholders could even realise a considerable return on investment.

This offers retail investors access to the kinds of opportunities that used to be the sole domain of big venture capital firms.

Mini bonds have three to five-year terms and around 7% or 8% interest rates. These bonds are rarer, but high-profile companies like John Lewis and Hotel Chocolat have also issued mini bonds in the past.

In peer-to-peer lending, meanwhile, investors are matched with businesses in need of finance. Interest rates are lower for the business, while investors can access a better return than a savings account would offer.

Altogether, crowdfunding offers investors a chance to build up the kinds of businesses they want to see in this world. Whether that’s a sustainable pet food made with insect protein, or a whisky and gin distillery, there’s something to suit all tastes .

What does all this mean?

Variety is the spice of life: there are an extraordinary array of alternative investments, each with their own strengths and weaknesses. Choosing which path to take can be complex, but also highly rewarding.

The personal touch: often, alternative investing offers a chance to own something with both personal and economic value. A collection of beautiful paintings, perhaps, or delicious whiskies.

Try new things: there is also the opportunity to invest in an exciting new technology, like cryptocurrency, or a brand-new business venture.

Express yourself: for anyone seeking to move beyond well-trodden paths, alternative investing offers a chance for expression and creativity as well as sensible diversification.

Mr McCarron has joined Distell after a 15 years in the industry, which has involved several stints working for distilleries on Islay. His appointment comes as Bunnahabhain plans to release limited edition expressions for its virtual whisky festival in June. The Feis Ile, which is taking place online for a second time, will include two virtual tastings live from the Bunnahabhain distillery on June 4.

Sarah McKeeman, global brand manager for Bunnahabhain, said: “Fèis Ìle is the biggest date in Islay’s calendar, and we’ve put together an incredible programme of virtual events, new limited editions and some very special surprises to be announced closer to the time. We’re really pleased to welcome Brendan McCarron as our new master distiller.”

Next article Speyside distillery unveils 'most prestigious' whisky yet