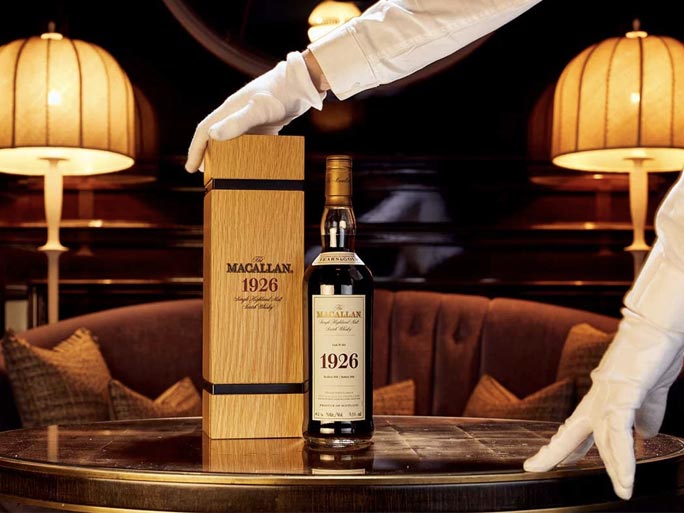 Originally Posted By Inside Hook

Another week, another whisky auction record set to be broken.

In pretty much any other year, we wouldn’t blink an eye at the news that a bottle of The Macallan 1926 Fine and Rare 60 Year Old is estimated to fetch over £1m, or about $1.37 million. It’s definitely a collector’s item: It contains liquid distilled nearly a century ago (during Prohibition, no less) and is one of maybe 12-14 bottles in the world adorned with the Fine and Rare label.

It’s part of Whisky Auctioneer’s “The Perfect Collection,” a private collection of over 3,900 bottles of rare single malts from the likes of The Balvenie and Bowmore, plus more from Scotland’s long lost distilleries (including Dallas Dhu, Port Ellen, Glenugie and Killyloch, with some bottles dating back to 1921). This is actually the second part of the auction — the first bottles to go under the hammer back in February of 2020, and that initial offering fetched a total hammer price of £3.2 million; it was also the first time an online auction house sold a million-dollar bottle (which was a different bottle of The Macallan 1926).

“The Macallan 1926 Fine & Rare is one of those handful of iconic whisky releases which has accrued such a lofty status that it exists more in relation to fine art these days than other whisky bottlings,” as rare whisky expert Angus MacRaild said in a statement announcing the auction. “Its performance at auction will no doubt be a powerful, bellwether statement about just how iconic and culturally relevant Scotch Whisky remains in the 21st century.”

[Editor note: There’s a bottle of whiskey up for a different, private auction in February that may very well break this record. That info is under embargo until next week. Stay tuned.]

And 2020 in general wasn’t bad at all for Perth-based auction house, now in its eighth year; In a one-month timeframe in the fall, WA hosted a £375k Bourbon and American Whiskey Auction, a £3.3m “regular” October Auction and a £218k hammer price for a Glenfiddich Auction.

So why is everyone throwing money at old whisky/whiskey?

“Whisky tends to catch the eye of investors when it is particularly rare and limited,” as Iain McClune, Founder of Whisky Auctioneer, tells InsideHook. “Recent reports have shown that over the last decade, the value of rare whisky has been increasing at a significantly high rate, even surpassing that of fine art and classic cars.”

Last spring, and perhaps lost just news of Covid hit, Knight Frank’s luxury investment index The Wealth Report reported that the value of rare whisky had not only increased by more than five times (a 564% increase, actually) during the past decade, it seriously outperformed cars, art and wine.

And pandemic be damned. “Even within an uncertain climate across the globe over the last year, we have seen our international base, as well as our auction results, consistently grow,” he says. The stats back him up: Whisky Auctioneer hosted 17 online auctions last year in what ended up being a record 12 months for them, totalling a hammer price of almost £30 million, a record year.

Says McClune: “This suggests that whisky is continuing to be as popular as ever. And we know that many customers have an eye on investment when they are considering buying whisky on the secondary market.”

Isabel Graham-Yooll, auction director for the London-based Whisky.Auction — which does quite well outside of its namesake spirit with Cognacs dating back over 200 years — credits both consumer interest and the auctions moving online. “Old and rare whisky and spirits have long been traded between a smallish network of enthusiasts, but more recently the internet and specialist online auctions have democratized the market for old and rare spirits,” she says. “Now anyone can now buy and sell spirits and they can get excellent independent advice from places like ours, too.”

That’s not saying 2020 (and now the sequel) haven’t presented challenges. “What we’ve seen during each of the worldwide lock downs is that whisky and spirits enthusiasts have taken the opportunity to pop open their special ‘rainy day’ bottles and enjoy them. At the same time not everyone has these bottles to hand so they have been buying them too, so online auctions have made it easy for people stuck at home to enjoy their hobby.”

And, nodding to tough times for many: “Some sellers are trading their amazing bottles to fund themselves through tough times and others are snapping them up while they can.”

In the end, the unique nature of whisky may be its best asset, pandemic or not. “Whiskies and other spirits last indefinitely, like a quality watch,” says Graham-Yooll. “There is no ‘use by’ date, but at the same time bottles do get opened and consumed, perhaps more often than you’d imagine. It means there are fewer and fewer and fewer of the great bottles all the time. And this makes for a great investment.”

Next article An Insider Insight - From Scotch to Whisky Investment