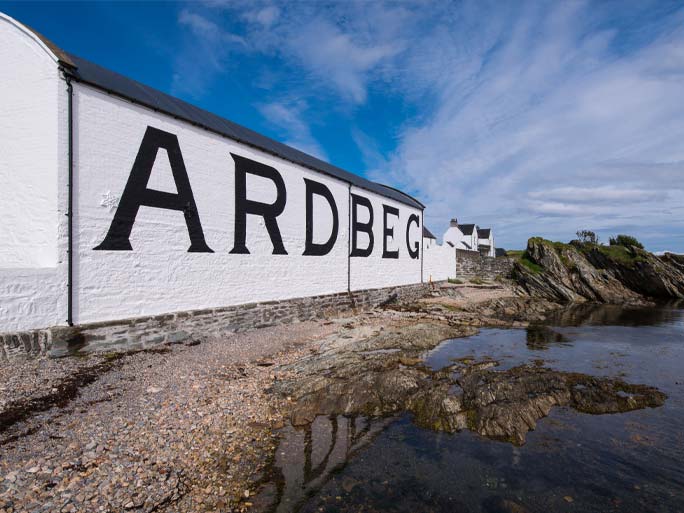 It hardly seems possible that between 1989-96, the Ardbeg distillery on the south coast of Islay was only operational for two month a year. Demand was insufficient to warrant greater production.

Today, the classic Islay malt is revered, and there are many who would not argue with the company’s own boast that it comes ‘ as close to perfection as makes no difference.’ The brand currently has over 120,000 members in its official fan club known as the Ardbeg Committee. During a lengthy closure from 1981, bottles of Ardbeg were jealously guarded and began to change hands for large sums. Fortunately, marketing of Islay malts is conducted in English. The appeal might not be so great if one had to ask for a bottle of Taigh-staile na An Airde Bheag which roughly translates as the distillery on the small promontory.

Founded in 1798, commercial production commenced in 1815, and for much of its history Ardbeg has added body and flavour to a number of blends. With a peat ratio of 50 ppm, coupled with buttery vanilla and warm pastry, it is arguably one of the most distinctive tastes in the field of malt. Those responsible for handing out medals agree; in the past decade Ardbeg has been awarded – inter alia – World Whisky of the Year, Scotch Whisky of the Year and World’s Best Single Malt.

Spirit produced after the sale to Glenmorangie in 1997 is unofficially known as New Ardbeg. Seven years later the company was sold to luxury goods conglomerate LVMH, and today’s production capacity of 1.25 million litres a year from only two pot stills is considered a highly efficient return.

Taking the ferry from the Mull of Kintyre to Islay, one docks at Port Ellen. How to then find your way to An Airde Bheag? Simple – follow your nose.