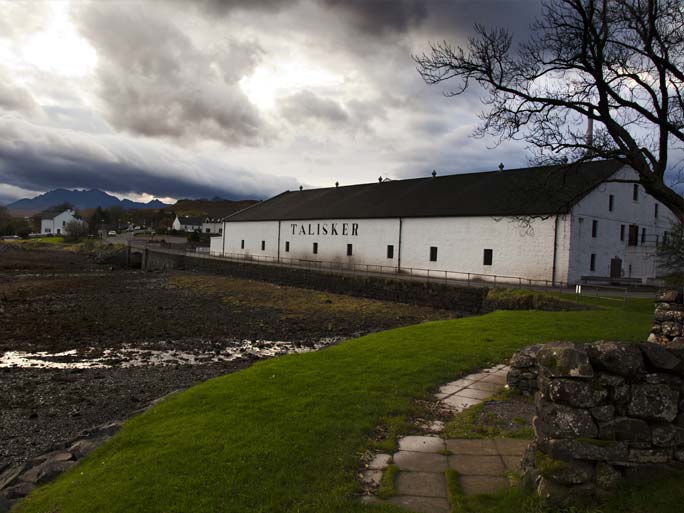 After a number of false starts, brothers Hugh and Kenneth MacAskill finally founded a distillery in 1830 at Carbost on the west coast of the Isle of Skye. It was a wise decision. The rugged country and Atlantic winds undoubtedly impart an added component to the medium-peated, robust flavour of Talisker.

Some 60 years later when the lease was up for re-negotiation, the landlord, Chief of Clan Macleod added the £23 12shillings rent almost as an afterthought.  His principal demand was for a 10 gallon cask of the finest Talisker! Reputations are made quickly on a small island. And with Skye being a hugely popular destination for tourists from all over the world, that reputation has been easy to foster.

Visitors to the distillery will see 3 spirit stills, which are replicas of the originals, capable of producing a total of 3.5million litres of whisky a year. Once triple-distilled, Talisker reverted to the more conventional double distillation in 1928.

Now a leading brand in the Diageo stable, the flavour of the whisky is enhanced by its water source running over the peaty Cnoc nan Speireag, the Hill of the Hawk.

Since the turn of the Millenium, aged vintages have been released periodically and these are increasingly winning awards at major wine and spirits competitions