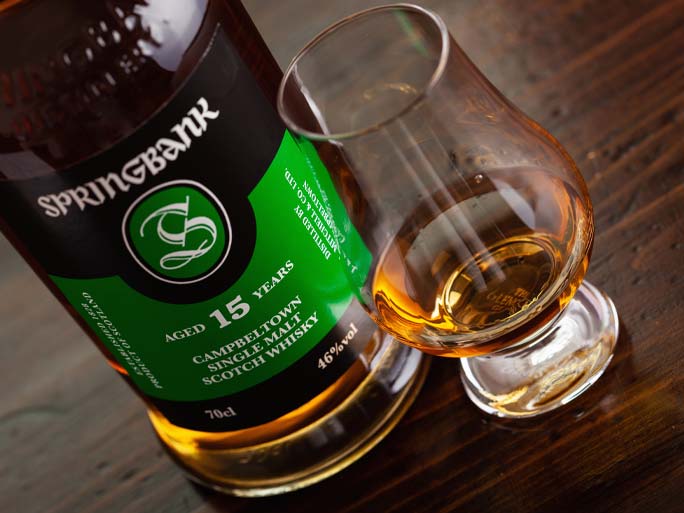 If you prefer to take your dram in the company of a fine Havana, comfortable in a favourite winged leather armchair in your well-established library, then the 25-year-old, Local Barley special edition Springbank could be the malt for you. In addition to a nose of almonds and butterscotch, the 1400 bottles are said to evoke cigar boxes and old, leather-bound books!

This Campbeltown distillery was founded by Archibald Mitchell in 1828 on the site of his own illicit still. Even then, it was only the 14th licensed distillery in the town which for a lengthy spell could claim to be the whisky capital of Scotland, and thus of the world. The first mention of Campbeltown whisky is in 1591. Exactly three hundred years later, with a population of 1969, the ‘capital’ of the Kintyre Peninsula, could claim to be the richest town in Britain per capita.

However, in the 1980s, whisky suffered a crisis of identity and demand fell away. Many Campbeltown distilleries closed never to reopen, but after a period of on-off production, Springbank weathered the storm and today, under the stewardship of Hedley G Wright, the great, great grandson of the founder, the brand is firmly established and goes from strength to strength. Not surprisingly, the company takes great pride in its inherited values and traditional way of distilling; 100% of the production processes taking place on site.

Lightly peated, and using the 2.5 distillation method, Springbank is available in 10, 12, 15,18 and 21-year-old offerings, augmented by limited edition special bottlings.